Hard Magic: The Next Big Thing


First I want to thank Beryl Singleton Bissell for tagging me.  Read about her next big thing at http://www.berylsingletonbissell.com/newsletter.htm?newsletter=

I am looking forward to reading Beryl’s new work in progress.  It promises to be as honest and distinctive as her earlier memoirs The Scent of God  and A View of the Lake, but Beryl’s latest will be a work of fiction.  With such a compelling subject, I expect and predict a powerful reading experience

My next big thing?  Here are my responses to the ten questions: 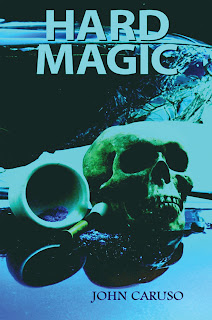 What is your working title of your book?

My novel is completed and is called Hard Magic. http://www.amazon.com/Hard-Magic-John-Caruso/dp/1479103853

Where did the idea come from for the book?

It began with a local newspaper article about a man who was getting grief for turning his property into an unlicensed junk yard.  Officials and neighbors were after him to clean up his yard.  You see places like this in poor rural areas.  One in particular I used to pass all the time caught my fancy.  Then one night as I was driving to work the idea struck me, what if somebody’s property was being mysteriously littered with wrecks?  You know, sort of the reverse problem of the man in the story.  In the next two nights during some downtime at work, I wrote a draft of what would become the first chapter of Hard Magic.

What genre does your book fall under?

I’d say Young Adult for general marketing purposes and because the main character is 14, but there are just as many important adult characters and concerns in the novel, and there is enough equality between the young adult and adult characters that this novel has really broad appeal.

Which actors would you choose to play your characters in a movie rendition?

My partner and I have had a grand time at fantasy casting central. Some of the roles seem easy to cast, others not so much.  For Osmena Searle, I would say Glenn Close, Olympia Dukakis, or, my dark horse, Patricia Clarkson.  For Zephyr LaFrance I would chose one of my two favorite Lauras.  Laura Dern or Laura Linney.  For Aster Corgan I would want Allison Janney.  Merlin Greenway I sort of see someone like Hector Elizondo.  The teens in the book including the main character Jude Corgan are so unusual in appearance (by Hollywood standards) they would have to be played by unknowns.  For Calvin, let’s just say if Jean Marc Barr were still a teenager I would cast him.  You’ll just have to read the book to see if you agree with my casting decisions.

What is the one-sentence synopsis of your book?

Fourteen year-old Jude Corgan’s search for answers about his brother’s death leads to stunning revelations and a powerful magic that can change the world.

Will your book be self-published or represented by an agency?

I have self-published it through Createspace.com https://www.createspace.com/3962821 as a print-on-demand and also as a Kindle book http://www.amazon.com/Hard-Magic-ebook/dp/B00B65UDBE.  My first novel Lightbearer http://www.amazon.com/Lightbearer-John-Caruso/dp/1602821305 was published through the traditional route and I felt I had more control and had a better chance of breaking my novel out by self-publishing.

How long did it take you to write the first draft of your manuscript?

In elapsed time it took me 5 ½ years.  In the actual writing time it took about 8 months.  The novel sat untouched for almost 5 years.

What other books would you compare this story to within your genre?

I was inspired by the mythic stories of Natalie Babbitt.  I didn’t realize it as child but her book Goody Hall is a retelling of the Hercules myth.   I just knew it was mysterious and thrilling. So in some ways  Hard Magic is more related to books I read growing up than those of today.  Even those of Madeleine L’Engle.  I recall the chaotic climax in the cathedral in The Arm of the Starfish, when I think of the climax of Hard Magic.

Who or what inspired you to write the book?

I think one of the reasons the book sat for so long was that I had a really intriguing idea but I didn’t have an ending.  And the reason I was having trouble plotting was because I didn’t know where the heart of the book was.  Suffering some losses in my life and understanding the importance of key relationships helped me understand what my book was about. It showed me what was at stake in this story.  A genuine novel comes out of living, not simply good storytelling or an intriguing premise.  I couldn’t complete this book and do it justice until my living had caught up with my idea.  That’s what novels are all about.  We write to find out what we know, and living is the means of acquiring that knowledge.

What else about your book might pique the reader's interest?

It’s a story about sibling bonds and relationships, which is echoed over and over again in the story, and that has roots in the oldest sibling rivalry story in Western culture.  It’s something that hasn’t been focused on as much in YA fiction as say parent/child relationships (the mother’s love theme of the  Harry Potter books or the father/son conflict in the Percy Jackson series), and the formula of romantic love you see in many popular series like the Twilight books.  The other big one is the loner hero of much superhero fiction, the new dystopian craze and even plain old teen angst fiction.  The thing is that it’s a comic novel at heart and you don’t really see that many YA comedies.  But when I say comic, I’m not only speaking about the humorous sense, or its upbeat attitude, but also that there’s something going on with Hard Magic and Shakespeare.  And it’s not the skull on the book’s cover.  That’s the only hint I’ll give.

John Caruso
John Caruso is a writer and artist living in Vermont. His novel Lightbearer was a 2010 Foreword Book of the Year finalist and a 2011 Rainbow Award Honorable Mention. His Young Adult novel, Hard Magic, has won honorable mentions at the 2013 San Francisco and Hollywood Book Festivals and was 1st Runner-Up at the 2013 New York Book Festival